Sage King Gustavus III (1746-1792), betrayed by sister-in-law and murdered by her puppets

Sweden is a special country to analyse for the whole world – not only for its modernism, extreme feminists and sexual freedom. It is said that all of mankind´s sins originated from Swedish ancestors of the names Adam and Eve in the Garden of Eden. The female snake Lilith tempted them into revolting against God for the snake´s false promises. It is said that the snake Lilith had been married to Adam before Eve was married to him but Lilith refused to obey him as her husband and Master. It is also said that “history is repeated” and we have found evidence in Sweden´s history and its own “Chinese dynasty of North Song” indicating that this country has bred some of the worst demons in the history of the world. Indeed, in Chinese cosmology the following is said about the North:

“…in Chinese cosmology, the north is regarded as the origin of the demonic…” . (Daoist Ritual, State Religion, and Popular Practices: Zhenwu Worship from Song to Ming (960–1644) by Shin-yi Chao (review)

Above L-R: Queen Charlotta, the evil ringleader behind the murder of sage King Gustavus III, Queen Sophie Magdalene of Sweden – wife of King Gustavus III who threatened him seven months before his murder.

It is said that history is repeated and there is much to investigate concerning the history of Sweden. Let´s take a look at Swedish history and their sage King called Gustavus III (1746 – 1792), a man admired by all of Europe in his time for his cultural interest and his sagacious wisdom. Due to the extremely corrupted Swedish nobility he took away the privileges from the Swedish nobility in 1789 and gave chances to the common Swedish people to take office.

Thus the Swedish nobility hated their King and led by a nasty woman called Charlotta and her group of treacherous Swedish noble women they first made a social boycott against the King and attempted a failed murder conspiracy in 1789. They conspired to slander and finally kill Gustavus III with the help of their corrupted men. Remember that at this time witchcraft was at its peak in Sweden and Europe with Illuminati and freemasons organised to overthrow all monarchies by sorcery, deceit and propaganda  – a forerunner to the communists that were also supported by the freemasons. Both Charlotta and her weak and corrupted husband, duke Charles, were leaders of the Swedish freemasons. Charlotta was grandmaster of the only female masonic society in all of the world – speaking of the female snake Lilith in the garden of Eden.

Gustavus III fought a war with Russia in 1788 – 1790. He won the naval battle at Svensksund, he made a good peace treaty with Russia and came back to Stockholm where he took part in a masquerade where the conspirators took part in the murder where they shot him in the back. Now this is almost an exact copy of the events surrounding the murder of Yue Fei in China. Fake accusations and slander and finally a conspiracy to kill him before the common people protest. Also, after the murder Sweden never had a real king anymore so it can be said that the murder of Gustavus III ended the kingdom of Sweden and started an era of unprecedented evil in Sweden. Just like in China where North Song was ended by an evil woman and her corrupted husband. The Swedish folk song about the murder of their beloved King goes as follows:

Kung Gustaf disappeared,
and dead he is.
Blessed his cold corpse is.
And the angels rejoice in heaven for his soul
and they all wait for the King.
Surely you have heard?
The nobles murdered King Gustavus.

The main leader of these devilish acts was a woman, just like Lady Wang in China. She was called Hedvig Elisabet Charlotta of Holstein-Gottorp at birth. Later she took over the queen title of Sweden. She was married to the King´s little brother Charles.  Their relationship was purely formal and both spouses led a “modern” and lavish lifestyle. Her portrait looks every bit as evil as her actions and she led a group of noble ladies to boycott the King and spread false rumours about the King being insane and a homosexual who participated in orgies with other men. All of that was of course all lies. 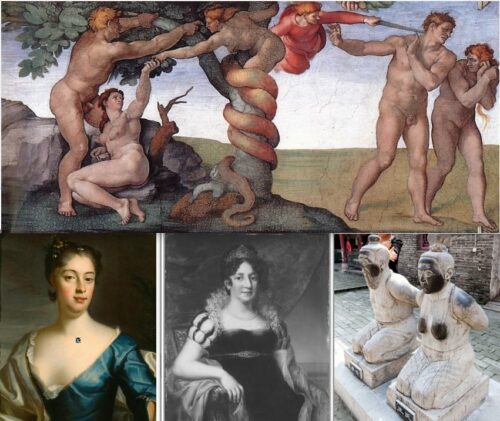 Garden of Eden. Top: Lilith-snake, Adam and Eve all thrown out of the paradise for their treason against God.

Gustavus III was shot in the back by a group of “noble men” with masks who surrounded him in the opera with black robes and masks in March 1792. The King said after the shot that the murderers had visited the brothels in hell – referring to the corrupted Swedish noble men who were in bed with the evil woman Charlotta and her female gang that controlled these male cowards to murder on her behalf. She instigated large parts of the Swedish noblesse to conspire against the King after he took away the corrupt Swedish nobility´s benefits in 1789.

Charlotta was also married to the King´s little brother Charles who was the master (male) mason in Sweden but who was very weak and corrupted by his evil wife. She also spied for France and the murder of the Swedish King led to the murder of the French King with the Swedish murderers involved in the royal killings in France too. The witch in fact ended the Swedish monarchy just like Lady Wang ended the North Song dynasty. She had poor character and was lascivious. She gave birth to two children that died within one week. Her dead children didn´t originate from her weak husband. 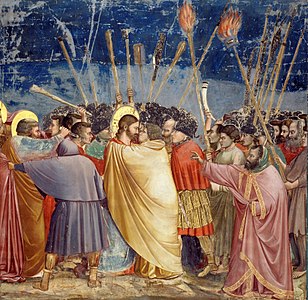 Judas Iscariot in yellow – a classic color of treachery

Queen Charlotta was later even part (and founder) of  tthe “yellow rose” – a secret society with a goal to usurp power among many other things .  I quote from Wikipedia about their worship of women: “their members worshipped female vaginas and everyone who was admitted into the society had to lie down on top of a naked woman´s genitalia that was painted on the floor. Then they took an oath and received “their rebirth of a pure nature”.

Pure evil and again we see the matriarchic elements so typical for animal snakes that these Swedish satanists tried to imitate.  Modern culture is controlled by those degenerated elements. When the King at the time found out about this secret society he dissolved it at once and expelled its formal leader Boheman from Sweden. This caused a conflict between the King and his uncle and aunt. The King had been informed that his relatives conspired to seize power from the King and that is exactly what they did a few years later. The most shameful thing is that they got away with worshipping the devil openly. No punishment. The reason was probably that the whole Swedish court at the time was full of similar people of corrupt morality.

When Charles passed away in 1818 Charlotta refused to admit his death and tried to use various pseudo-scientific methods to revive his corpse until officials had to remove her from the corpse by violence. It is said nobody in Sweden except Queen Charlotta mourned his death. Her mourning was of course not pure, it was purely selfish. She died five months later and nobody knows today if it was suicide or some other cause.

Notice however that Charlotta and Charles were allowed to live for 26 years after murdering the King and doing all kinds of evil for fame and gain.

Everyone knows that (Sw)Eden is the only country with the name of “Eden” in the whole world. This is no coincidence and polymath Olof von Dahlin disclosed the terrifying demonic past of (Sw)Eden in the 18th century in his magazine called “The Swedish Argus”. Argus is the Greek all-seeing giant that kills the world snake called “Echidna” in Greek mythology. Dahlin pointed out the Swedish demon king in 1733, calling out the horrible and sinful woman “Mrs heretics and a socialite corpse”. Her name was Hedvig Catharina  Lillie, her name being eerily similar to the snake in the Garden of Eden who was called Lilith. That woman was the most popular leader of the Stockholm noblesse in the 1720s-1730s. It was said she destroyed the Swedish nobility´s morality and she was laviscious while mixing genders like never before – with men controlled by women. Dahlin called her “a thing” referring to her as a dead corpse walking around and pulling people down to hell by destroying their traditions and morality. From that age onwards Swedish men were forever enslaved under their women according to Dahlin. This was their own shame and damage to have been enslaved by such incompetent and wicked women.

Similarities between Lifes of Yue Fei and Gustavus III 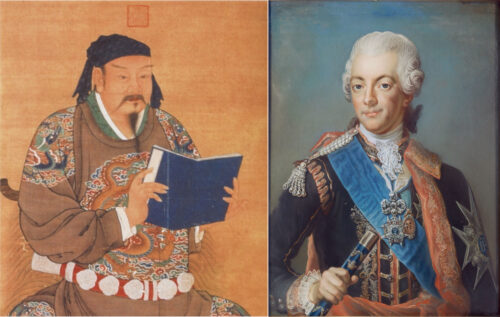 – These two men were the last opposition that tried to save their dynasty (Yue Fei) or monarchy (Gustavus III).  They both failed due to utterly corrupt people in court.

– Both were murdered by corrupt men controlled by an evil snake lady.

– Both were betrayed by their wife.

– Both were murdered just after returning from war.

– Both were sagacious and multi talented men with impeccable morality and with a great heart for their nation.

– Both were betrayed by their own government.

– Both were slandered by evil people creating false rumours and accusations.

– Both had short lifespans. 39 years for Yue Fei and 45 years for Gustavus III.

Similarities between Lady Wang and Queen Charlotta of Sweden 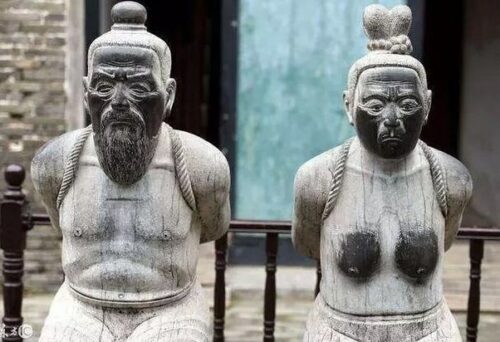 – Both were responsible for corrupting the moral standard in society and at court.
– Both wanted to destroy the old kingdom/dynasty and take over the new one.
– Both conspired to murder their national hero by inciting and bribing corrupt men to kill him as a gang. All based on jealousy and desire for fame and gain.
– Both escaped punishment and took over power in the royal court after murdering their enemies.
– Both were most probably spies and traitors working for a foreign nation – jurchen/jin for Lady Wang and France for Queen Charlotta.
– Both had a weak and utterly corrupt husband.
– Both were involved in a long line of scandals involving murder, conspiracies, poisoning etc.
– Both women died after their husbands.

– Both died a mysterious death. Lady Wang´s tongue grew 3 inches out of her mouth while dying. Queen Charlotta´s death is still a secret.

Since almost 1000 years Chinese people have urinated on Lady Wang and her husband while eating their fried ghosts for breakfast. You could say that they are the most hated Chinese people in all of Chinese history, perhaps in world history. North Song did not punish them but south Song punished them. South Song was more righteous than North Song based on this single story.
Of course, this is all arranged to teach the world´s people a real lesson in the future. Destruction will be the end result for everyone that goes against the laws of the universe.  Murdering their heroes over and over again while imitating the story of the Garden of Eden, is this the destiny of Sweden? Let´s hope not.