Noble Wisdom has decided to create a series of portraits of some western Falun Dafa practitioners. This is done with several purposes, one of which is to inspire people familiar or not familiar with Falun Dafa, and show them different perspectives and life paths that are all inside the great cultivation way of Falun Dafa. Another purpose is to show people some examples of the ideas and lifestyles of these practitioners.

In our first article we present a veteran practitioner from Sweden who lives in Switzerland since 27 years, the 47 year old Richard Kleinert. I had the pleasure to discuss matters of life and cultivation with the humble Kung Fu Master living in Zurich. Time flied during our talk and I can honestly say that I am honored to be a friend of Richard. In my opinion his humility and simplicity is the foundation of his wisdom and his deep seated powers.

Richard´s father is Swiss, and his mother is Swedish, and he grew up in a small Swedish city near the Norwegian border in a family of seven. In his family almost, everyone practiced martial arts from an early age, but Richard had a particularly strong interest and he practiced martial arts with great intensity and passion. Richard has practiced western boxing, Wing Chun, Kali Escrima, Shaolin Kung Fu and Tai Chi Quan among many other systems of the Buddhist and Daoist systems from both China and Japan. 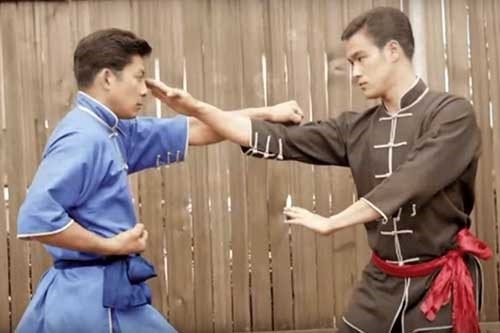 Taky Kimura and Bruce Lee around 1962

After Richard had finished his studies in alternative medicine and natural sciences in 1990 he moved to Zurich, Switzerland, the homeland of his father. In 1994 he travelled to the US and practiced martial arts under the guidance of the great Master Taky Kimura, one of the very close friends, co-actors and the top student of legend Bruce Lee.

Richard explains: The time with Taky Kimura in Seattle was relatively short, but no less instructive. I felt that the principles of simplicity, spontaneity and naturalness of Jeet Kune Do came to my heart.

Although the JKD principle was the guiding principle of my martial arts, I did not want to use the name of Bruce Lee’s “Jeet Kune Do” and his reputation for my own Kung Fu school.

Bruce Lee is world famous for his martial arts but since he was the Master of that school nobody can reach his level in that school of Kung Fu. I do believe, just like Bruce Lee, that one should not imitate others like a parrot but instead appreciate ourselves and being ourselves. Striving to become different than we already are deprives us of our own self-worth and inner peace.

Our value can´t be measured by our abilities and actions. Every single life is absolutely unique and immeasurably valuable.

To fully express the uniqueness and value of each person, there was no more appropriate name than “Zī Rǎn” and thus the “Zī Rǎn Wu Yi Kung Fu School” was born. 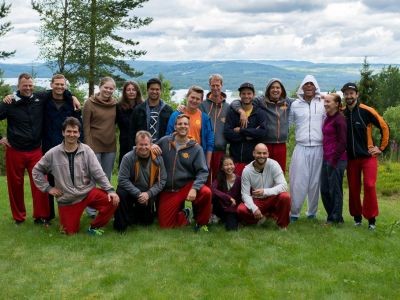 Richard and his students on training camp in Sweden 2015

Inspired by the high philosophical values, the inner strength and the richness of Chinese martial arts, Richard founded the Zī Rǎn Wu Yi Kung Fu School in Zurich in 1998 to provide access to the ancient treasures and wisdom of this timeless tradition of martial arts. Richard teaches his deep insights about Kung Fu and at the same time introduces his students to the wondrous cultivation practice of Falun Dafa. The term Zī Rǎn is not directly to be understood as a fighting style, it is rather the guiding principle and key principle for this way of martial arts. In Chinese, Zì Rán literally means self or natural (Rán) self (Zì). It signifies the primordial nature of all things, equal to spiritual clarity – the foundation of everything we do. Wu yi comes from the northern Song dynasty term of martial arts.

Implemented in martial arts, Zì Rán means synchronization and harmony of learned techniques and natural, spontaneous instinct. Zì Rán Wǔ Yì Kūng Fū is the subtle art of uniting the essence of the mind with the technique in which it comes to fruition.

Martial arts is a special art because its nature is such that it directly faces joy, suffering, life and death as Richard explains. If a Kung Fu practitioner can renounce his selfishness and let go of the idea of life and death, then he can enter the present where the true reality is. It is a glorious and liberated state of being. The martial arts concerns the self-education and self-exploration. This concerns a very profound topic – your own self-realization. This makes martial arts a science and an art of living. Also, each person is unique and therefore each student must find his natural style of Kung Fu in order to reach his full potential and therefore the teachings must leave enough room for each person´s unique characteristics to be expressed.

There are three levels in Richard´s Kung Fu. The first one is to learn how to protect yourself. The intermediate level includes both protecting yourself and others. The high level requires how to protect yourself and others while protecting the wellbeing of your opponent. Richard has enlightened that if we can let go of the resistance in ourselves (which is mostly caused by fear) we can pacify others and we will automatically move our body in the most natural and effective way to avoid injury both in ourselves and in our opponent. 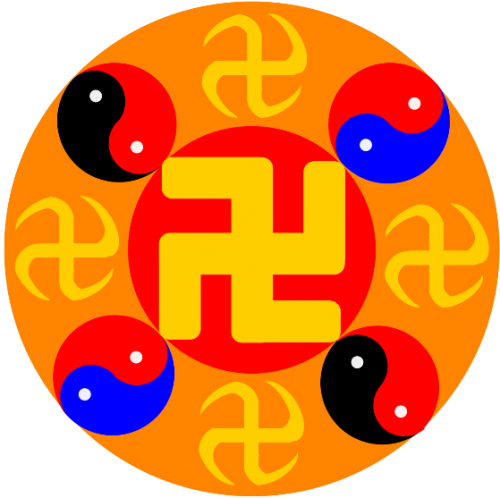 The Falun symbol includes the spinning swastika from the

Buddha school and the spinning tai chi from the Dao school.

A life changing event for Richard occurred in 1997 when he learned about a new spiritual cultivation way called Falun Dafa. Falun Dafa is based on improving one´s  own character while trying to always follow the characteristics of “Truth-Compassion-Tolerance” in daily life. Richard had always been looking for “the way” and he had met with different masters around the world, i.e. in India. Those masters had always seen great spiritual potential in Richard. After Richard found Falun Dafa, which comes from China, he started to cultivate Falun Dafa right away and today he has practiced it for 20 years and he has greatly improved his own character and compassion for others. In his family of seven people, five people are practicing Falun Dafa today. Richard also has a practicing wife and a son who is practicing Kung Fu with Richard.

After Richard started to practice Falun Gong he decided to stop practicing Kung Fu for a time. Another event made him realize that Kung Fu people have great predestination for cultivation. Once the Chinese Shaolin monks came to visit Switzerland to present a martial art Kung Fu show and Richard was there to pass out flyers to the audience about Falun Dafa. He discovered that 95% of the people coming to see the Shaolin monks, wanted to learn more about Falun Dafa. Richard had a sudden enlightenment that he could use his Kung Fu knowledge to meet other martial arts practitioners with great interest in practicing Falun Dafa cultivation.

Another great event for Richard was when Master Li Hongzhi visited Switzerland in 1998 where he held an experience sharing conference for local practitioners. Richard was chosen to be Master Li´s bodyguard and he felt that it was a great honor for him.

Richard is to the top right in the painting. Ⓒ “Art of Zhen Shan Ren.”

After the persecution of Falun Gong started in 1999 Richard travelled to China in 2001 to protest against the Chinese Communist Party´s(CCP) evil persecution of Falun Dafa practitioners in China. There was a group of around 30 western practitioners who went to Tiananmen Square with a big banner to show their support for Falun Dafa. After the police came Richard used his supernormal power to make himself heavy as a mountain and unmovable. Six police officers couldn´t move him from the square and only after they started talking to him in a friendly way did he let go of his concentration so that they could lift him to the police van.

In the police station Richard had a vision where he saw the great red dragon symbolizing the CCP disintegrate. He could see that the dragon was majestic and beautiful at a distance but at a closer look it was both seductive and evil. At the police station the practitioners were denied going to the bathroom and after a long time Richard felt his inner anger coming to the surface. At the same moment that he decided to deal with the guards physically they let him go to the bathroom and became very nice.

Part 2 in this article series can be found here.