Charles Martel (c. 686 – 22 October 741) was a Frankish statesman and military leader who as Duke and Prince of the Franks and Mayor of the Palace, was the de facto ruler of Francia from 718 until his death in 741. Martel also became the grandfather of the legendary Charlemagne, the first European emperor after Rome´s collapse.

Martel is mostly remembered as the military leader that saved Europe from muslim invasion in 732 by winning a decisive victory at the battle of Tours in France. This victory meant that Christian culture could survive until modern times in Europe. Had the muslims taken control over Europe at that time, Christian culture would have been extinct today.

In his effort to maintain unity in the Frankish realm and to combat the Saracens, Charles relied heavily on the support of the Church and particularly on that of Boniface, the great missionary to the Germans. Charles encouraged the missionary efforts of Boniface and in return received new territories and considerable ecclesiastical revenues to support his fighting force. His role as protector of Christendom lay primarily in his wars against the Saracens. Charles was an independent protector of Christian culture but he didn´t want to mix religion with politics.

After establishing unity in Gaul, Charles’ attention was called to foreign conflicts with the Islamic advance into Western Europe a foremost concern. Arab and Berber Islamic forces had conquered Spain (711), crossed the Pyrenees (720) and seized Narbonensis, a major dependency of the Visigoths (721–725)[5]. After intermittent challenges, Arab and Berber Islamic forces under Abdul Rahman Al Ghafiqi, the Arab Governor of al-Andalus, advanced towards Gaul and then onto Tours, “the holy town of Gaul”. In October 732, the army of the Umayyad Caliphate led by Al Ghafiqi met Frankish and Burgundian forces under Charles between the cities of Tours and Poitiers (modern north-central France, leading to a decisive, historically important Frankish victory known as the Battle of Tours (or ma’arakat Balâṭ ash-Shuhadâ, Battle of the Palace of Martyrs). This battle ended the “last of the great Arab invasions of France,” a military victory termed “brilliant” on the part of Charles.

Islamic forces had a large dependency on cavalry and motivated their soldiers with large loots. This was an inherent weakness that Charles could use to his advantage and Charles was also a Master of fake retreats – turning a retreat into a quick offensive which surprised the enemy. 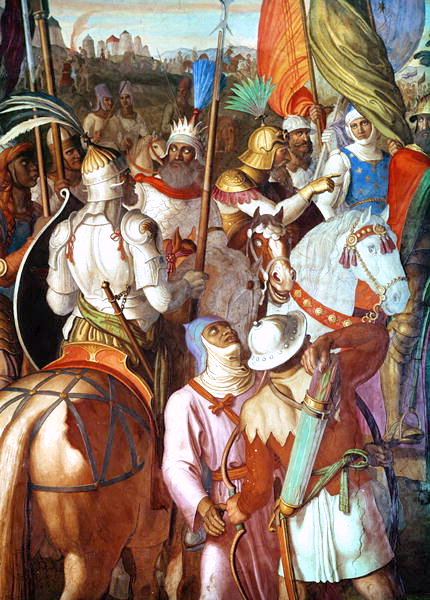 The Saracen army at Paris in 730

After Tours, Charles took the offensive, destroying fortresses at Agde, Béziers and Maguelonne, and engaging Islamic forces at Nimes, though ultimately failing to recover Narbonne (737). He thereafter made significant further gains against fellow Christian realms, establishing Frankish control over Bavaria, Alemannia, and Frisia, and compelling some of the Saxon tribes to offer tribute.

Apart from his military endeavours, Charles is considered to be a founding figure of the European Middle Ages. Skilled as an administrator as well as a warrior, he is credited with a seminal role in the emerging responsibilities of the knights of courts, and therefore in the development of the Frankish system of feudalism. Pope Gregory III, whose realm was being menaced by the Lombards, and who could no longer rely on help from Constantinople, asked Charles to defend the Holy See and offered him the Roman consulship, though Charles declined.

Martel means “hammer” and many people have perhaps pondered about the significance of such a great warrior with that kind of name. In Norse mythology the thunder God Thor is regarded as the most powerful and fierce God with his magic hammer called Mjolnir that eliminates all evil opposition.