In the Minghui article on April 23, 2017, called “The Sea of Suffering and Lust Seen in Another Dimension“ the author described how many disciples in another dimension all called out to Master, “Master, it is time to return. Please bring us back home!”. They wanted Fa Rectification to end and then the author saw this scene:

Master quietly pointed toward a sea, where tides rose and fell and the bank was crowded with boats. There was a man and a woman there who looked like the old forces. The woman had a pink lotus flower in one hand and a gourd with medicine in the other. She poured the liquid from the gourd onto the roots of the lotus. At the microscopic level, it consisted of tiny worms called Gu, a legendary, venomous insect. The man did the same but with a black lotus flower; tiny worms called Huo could be seen at the microscopic level. They put the lotus flowers into the sea, and those black and pink worms tangled together. The water instantly turned smooth and psychedelic, with pink bubbles. The sea was called the “sea of ending relationships,” also known as the sea of suffering and the sea of desire (corresponding to the demon of sentimentality and the demon of lust).

…Every Dafa disciple who can ride over the sea must be pure. Anyone who has even a tiny bit of hidden lust or sentimental desire would be ruined by the sea and buried there along with their boats, never to reincarnate. The billions of years of waiting, along with Benevolent Master’s merciful salvation, would be in vain.”

It shows that if practitioners don’t follow Master’s arrangements, then they would naturally be following the old force’s arrangements.”

This is a vision that seems to indicate that the old forces have a lot of power over practitioners who walk on the wrong path and that it´s very, very hard to pass the final test if our minds are not in line with the Fa. I believe that this article is a good starting point to discuss our cultivation process in Falun Dafa and what will happen at the final moment of Fa Rectification depending on whether we follow benevolent Master´s arrangements or if we follow the old forces arrangements.

Benevolent Master said about the lust test in Zhuan Falun:

“We begin cultivation practice as everyday people. The first step is this test.”

At my limited level, I have enlightened that the cultivation process of Dafa disciples arranged by our benevolent Master is a process where we at every level start by getting rid of the attachment of lust. You could say that we are “everyday people” or “sentient beings” in a particular dimension when we first enter into that dimension. Gradually we ascend in that dimension as we cultivate higher. 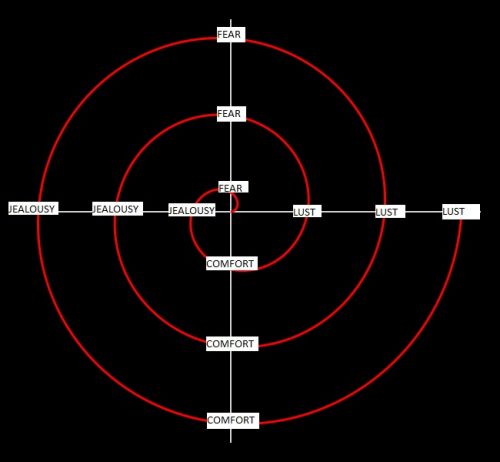 A very simple illustration of my understanding of our cultivation process

After passing the lust test in every new dimension other tests will follow such as the tests of comfort, showing off, jealousy, fame, gain and fear etc. When we reach the top of a certain dimension we feel pretty good and free of attachments. Very soon after that we enter into a new dimension at a higher level and all the old attachments show up again with lust being the first test at every new level. We also start to feel bad again since there is new karma to eliminate at every level. I believe that Falun Dafa cultivation is like traveling along a spiraling circle going upwards level by level until we reach our final consummation level and complete our cultivation process and cut all our bonds to the old universe.

If we follow benevolent Master´s arrangements benevolent Master will surely arrange for us to reach the top level of our “consummation dimension” at the moment when Fa Rectification ends. At that moment we will have let go of all our fear in that dimension. When we have reached our top level of our top dimension we won´t have the problem of failing lust or desire since we are on top of a dimension at a very high level.

For example, if someone who was quite good regarding the lust issue in the past suddenly fails the test of lust today it may mean that he has just passed into a higher dimension and has to start over again in that higher dimension. He must first eliminate the attachment of lust at the new level so that´s why he is tested again and might fail the first time. It´s just that the power of the attachments become a little bit weaker every time we reach a higher dimension.

As I see it, if a practitioner is diligent he will quickly pass through a certain dimension by passing all the tests while doing  the three things well. As I see it the old forces try to threaten and control us in many ways but if we understand our cultivation process in Dafa and follow benevolent Master´s arrangement with real faith there is nothing to worry about. These beings seem quite pitiful and full of jealousy and selfishness in line with the last destructive phase of the old universe. Of course it is good to be strict to oneself in personal cultivation but our main objective is to do the three things well and help benevolent Master to save more sentient beings. The level is automatically upgraded if we do the three things well.

Any attachment to time or any fear of not being able to consummate shows that we are still controlled by the old forces to a certain degree and that we don´t understand the cultivation process in Dafa.

When we have a poor cultivation state, if we each time steel our will and look inside sincerely without any notions, I believe that we will find our attachments, improve quickly and reach a higher level. Benevolent Master said in Zhuan Falun:

“When it is difficult to endure, try to endure it. When it looks impossible and is said to be impossible, give it a try and see if it is possible. If you can actually do it, you will indeed find: “After passing the shady willow trees, there will be bright flowers and another village ahead!”

When we fall down, if we get up quickly and sincerely want to eliminate our attachment along with the karma associated with the attachment we will improve our level and we will enlighten to new truths. I believe that the flowers that benevolent Master speaks of above means new truths at a higher level and the new village that he mentions means the new sentient beings belonging to that dimension at the new level. Those new truths and sentient beings at the new level are treasures to us.

Please point out anything inappropriate. My understanding is limited to my current cultivation level and I have no truth to offer.